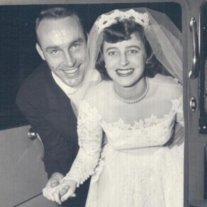 He was born in Lawrence, MA on January 4, 1926 to Richard and Doris (Knight) Clamp.  He attended school in Methuen, MA, and was a member of the Edward F. Searles High School Class of 1943, where he played trumpet and horn in the marching band.  He and his family were active members of Grace Episcopal Church in Lawrence where he was confirmed.

He enlisted in the U.S. Army Air Forces after high school and was completing pilot training when WWII ended.  After graduating from Wentworth Institute of Technology in Boston, MA, he began working at the United Shoe Machinery Corporation in Beverly, MA as a project manager in research and development, where he remained for twenty-seven years.  He later worked at Dexter Hysol Corporation in Seabrook, NH for fifteen years, and after retirement, did seasonal consulting for Donzi Marine Inc. of Sarasota, FL.  He held several U.S. patents for shoe manufacturing processes.

On November 22, 1953, he married Joyce Ann Ward of Methuen, MA at St. Monica’s Catholic Church.  They lived at 33 Beech Avenue in North Andover, MA where they raised three children.  In the summer of 1972, they moved relocated to Hampton after renovating the summer home they had owned there since 1955.

Mel was an active member of the Lions Club while living in North Andover and a life member of the North East Club in Beverly, MA.  He was an avid amateur radio operator (call sign WA1IVT) and member of the Port City Amateur Radio Club for many years.  He coordinated Civil Defense coverage for seacoast events, and had friendships with other ham radio enthusiasts throughout the nation and the world.  While wintering in Florida, he volunteered at a guide dog training facility and carried a photo of his beloved hunting dog “Betty Beagle” in his wallet for over fifty years.  Mel enjoyed music, boating, photography, good food, lively discussion, and living in the seacoast area.

In accordance with his wishes, his ashes will be scattered off the New Hampshire coastline that he loved so much.

Offer Condolence for the family of Melvin “Mel” Clamp