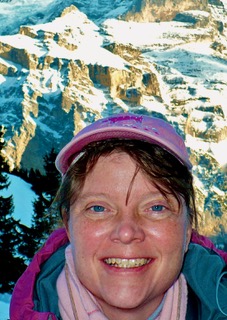 Portsmouth, NH – Wynn, as she was known to all who knew her, recently passed away after a multi-year illness. She lived an extraordinary and enviable life prior to her illness and enjoyed much of her last few years, even while dealing with an increasing number of disabilities. She handled her illness with grace, equanimity, stoicism and felicity: all trademarks of her core being. How people who knew her felt about her is summed up in a quote from one of her good friends, upon hearing that Wynn had a terminal illness, stating: “That, that cannot be right. The world needs more Wynns, not less.” She was one of the most sincere, likable, joyful and ethical people one could ever know.

Her father often aptly addressed her as: “Dear sweet Wynn”. Born in 1960 in New Jersey, her family moved to Burlington, Vermont in 1967. In 1974, her family spent a year in the UK. Wynn graduated from Burlington High School, attained a BA in International Studies and Economics from American University in Washington, DC., and worked for an educational research nonprofit in Washington for two years. Returning to Vermont, she received her Teaching Certificate from the University of Vermont and taught middle school for one year in the state. In 1986, she moved to Portland, Maine to work for Casco Northern Bank as a computer administrator, which led to her meeting her future husband Glenn, an officer at the bank. On their first date on Glenn’s 30 foot sailboat, with Wynn having no real boating experience, a sudden and significant squall arrived, healing the fully canvased boat over to her gunnels. With very little instruction, Wynn was able to power the boat away from the rocky shore, into the eye of the howling wind while Glenn struggled to drop the sails. At that moment as he thought: “First date, last date.”, he apprehensively looked over to Wynn at the helm and saw that she was smiling: it was an auspicious beginning to the amazing 33 years they would spend together.

Not only did they sail along the Maine coast for tens of summers, but after three years of marriage, Wynn suggested they quit their good jobs and go sailing for a year; they did, their trip ending in the Florida Keys. After that year, they moved back to New England; Wynn starting her Masters in Education at Mount Saint Mary’s with them finally settling in Portsmouth, NH where, in 2000, Wynn became a math teacher at Portsmouth High School. That same year, after Glenn finished up treatment for an incurable lymphoma diagnosis, they decided, what the heck, life is short, so Glenn became a part-time banker.

In sync with Wynn’s school vacations, over the next 17 years, the two of them traveled around the world: from visiting islands in the Arctic Ocean to hiking in the red center of the Australian outback and much in between; 100 trips, 40,000 photographs, and a million memories. During those years, Wynn obtained her Masters in Library and Information Science from the University of Rhode Island, belonged to the Portsmouth Women’s College Club, and volunteered at the Portsmouth Library. She traveled to Mozambique to help with a Mission/school project and was a regular Red Cross blood donor. She loved social gatherings, hosting and attending these get togethers with her many friends; tea and sweets being important components. Much time, every year, was also spent with her father, sisters and their families.

In a last letter to Glenn, Wynn stated: “I achieved all I hoped for.” Can one ask for a better life? Wynn did not think so.

She is survived by her husband Glenn, her father Jim and his wife Lorri, sisters Kate, Margaret and Anne, nephew Graham, nieces Anna and Montgomery, and her indefatigable mother-in-law, Marilyn. She is predeceased by her mother, Betty.

She will be cremated and her remains are to be spread across the globe. Wynn wished for her family and friends to attend a memorial celebration of her life when it is safe again to do so. Please feel free to leave thoughts, wishes, and condolences at the following memorial web site that has been set up in her name: https://rememberingwynn.wordpress.com/about/ remembering-wynn. In lieu of the regular, donations may be made in her name to the Center for Wildlife, PO Box 620, Cape Neddick, Maine 03902.  Wynn requested to sign off with the following:
“So long, and thanks for all the fish.”

Offer Condolence for the family of Elizabeth Wynn Welch Grande