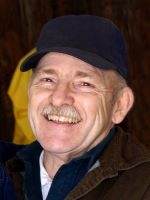 Berwick, Maine – William A. Peach, Jr., 79, of Berwick passed away on Sunday, October 20, 2019 at his home, surrounded by family following a period of declining health.

Born August 6, 1940 in Brockton, MA he was the son of the late William A. and Louise (Odenwalder) Peach.  Bill grew up in Foxboro, MA, graduating from Foxboro High School in 1958 and resided in Foxboro and Norton, MA before moving to Berwick, ME in 1976.  He served in the United States Air Force and was employed by Eastern Airlines as a sheet metal mechanic before starting his own metal shaping business in Berwick.

Bill enjoyed hunting and fishing and looked forward to his annual deer hunting trip to northern Maine with friends.  As a young man, he raised Black and Tan Coonhounds and spent much of his spare time coon hunting.  He built the house where he and his wife lived and raised their children in Berwick.  He enjoyed spending time with family and especially loved being with his grandchildren.

A Mass of Christian Burial will take place at a later date.  In lieu of flowers, donations can be made to the Alzheimer’s Association.

Offer Condolence for the family of William A. Peach, Jr.