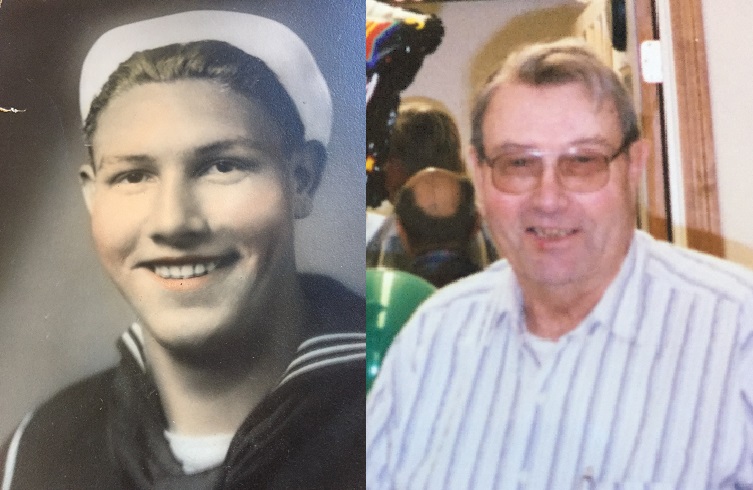 MERRIMAC, MA—Stanley Thomas Hardy, Sr., 96, of Merrimac, died peacefully at his home on November 5, 2020, after a brief illness, surrounded by his family.

He was born on September 23, 1924 in Orland, ME, the son of the late Maurice and Ruby (Snowman) Hardy. He attended school in Little Deer Isle, ME.   At the age of 13, he quit school and went to sea on various ships with his uncles.   He worked on barges off the Maine coast and traveled on tugboats as far south as New Orleans and on to Cuba.    His knowledge of the sea, much of which he learned from a great uncle in Belfast, would serve him and his country well.

He enlisted in the U.S. Navy on March 31, 1943, and after six weeks of basic training in Newport, RI, he was assigned to the destroyer U.S.S. Hall.   He was a plank owner and among the crew that commissioned the Hall on July 6, 1943.  He spent more than two years serving in the Pacific Ocean.   His ship was involved in the invasion of the Marshall Islands, the invasion of the Philippines, the assault on the Luzon Islands, and was part of a fire support task force during the invasion of Saipan, Iwo Jima, and Okinawa.   He served aboard the destroyer until she was decommissioned in San Diego, CA, in December of 1945.  He was then assigned to the cruiser U.S.S. Pensacola until he was honorably discharged on February 9, 1946, as a Quartermaster Third Class.   During his tour of duty, he received the Asiatic Pacific Campaign Medal with 5 stars, European-African-Middle Eastern Campaign Medal, American Campaign Medal, World War II Victory Medal, the Philippine Liberation Medal with one star, and the Philippine Presidential Unit Citation.

On April 9, 1951, Hardy was called to active duty for the Korean War and was assigned to a training ship on the Great Lakes.    He was honorably discharged on November 7, 1951.   He was awarded the National Defense Service Medal for service during this period.

He married Eunice Gray on March 10, 1946, at her father’s house in Brooklin, ME. They moved to Merrimac, MA and Hardy worked in leather shops and shoe shops in Haverhill, MA. They raised three children. He was a long-time member of the VFW, was active in the Pilgrim Congregational Church, was a little league coach, Cub Scout leader, a member of the Auxiliary Police, belonged to the Merrimac Bowling League, and enjoyed 35 years of square dancing with the Olde Town Squares in Newburyport.   But most of all, he loved being with his family whether at his summer home in Brooklin, ME where they hosted many cookouts or went boating, or on camping trips they frequently enjoyed during the summer months.   For many years, they traveled the east coast of the United States, from Maine to Florida, visiting friends or family during their travels.

In 1999 they moved from Merrimac to Brooklin, ME to live in the Gray family home for about 17 years. Then in November of 2016, they moved back to Merrimac to be closer to family members.

He was one of eight children. He was pre-deceased by his sisters Jean Haskell and Katherine Sweeney, and his brothers Wilfred and Maurice (Billy). He was also pre-deceased by a son, Stanley Thomas Hardy, Jr. (Tom).

Due to COVID-19, a private family service will be held at a later date. In lieu of flowers, donations may be made in Stanley’s name to The American Cancer Society, P.O. Box 22478, Oklahoma City, OK 73123.

Offer Condolence for the family of Stanley T. Hardy