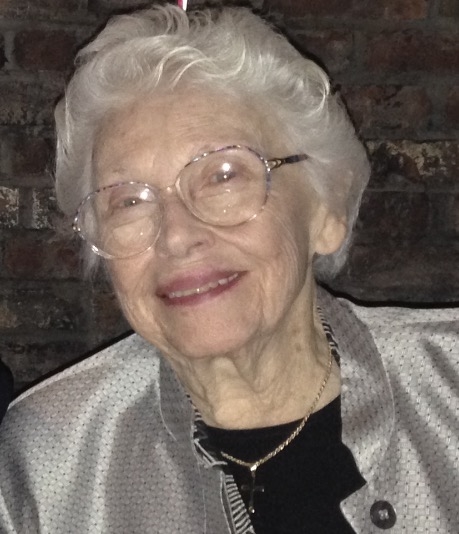 Ruth Burns Varley passed away on Saturday, August 24, 2019, at the Portsmouth Regional Hospital in New Hampshire, surrounded by her loving family.  She was 94.  Born in Norwalk, Connecticut in 1924, she lived there until her early teens when she and her family moved to New Jersey and eventually settled in Highland Park. She was a graduate of St. Peter’s High School and The College of St. Elizabeth.  After her marriage Ruth lived in New Brunswick, and in 1963 she became a resident of Bound Brook, living there before moving to New Hampshire last year.  After completing college, she worked in broadcasting at NBC in New York and at WCTC in New Brunswick before joining the law department at Johnson & Johnson.

She was active in the Saint Elizabeth Alumni Association, was a parishioner at Saint Joseph Roman Catholic Church in Bound Brook for over 55 years, and in more recent years regularly attended mass at St. Francis of Assisi Cathedral in Metuchen. Ruth was a woman of strong faith who was proud of her Irish heritage, and who loved her family dearly.

She was predeceased by her husband of 59 years, John F. Varley, her mother, Margaret Ryan Burns, her father, William J. Burns, a sister, Barbara M. Zonino, and two brothers, John and William S, Burns.  She is survived by three children: a daughter Maureen A. Varley and her husband Boris Moczula of Edison, and two sons, John J. Varley and his wife Marianne of Atlanta, Georgia and Thomas M. Varley and his wife Heidi of Portsmouth, New Hampshire.  She also leaves behind nine grandchildren: Maureen and Boris’ children Andrew (Caitlin), Mary, and Timothy Moczula; John and Marianne’s children Matthew and Leigh Varley; and Thomas and Heidi’s children Camden, Erica, Tess and Mitchel Varley.

The family will receive visitors on Saturday, September 7, 2019 from 9 – 10 am at The Cathedral of St. Francis of Assisi, Main Street, Metuchen, followed by a Mass of Resurrection there at 10:15 am. In lieu of flowers, donations in Ruth’s memory may be made to The College of St. Elizabeth in Convent Station, New Jersey.

Offer Condolence for the family of Ruth B. Varley