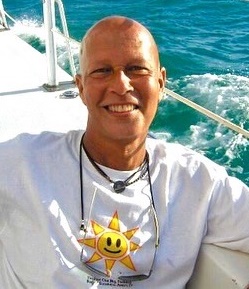 He married his soulmate and love of his life, Suzi (Laucher) Van Meter who preceded him in death October 7, 1997 from complications of ALS.  They had one daughter, Julie Elizabeth Cline, who survives.  Also surviving are his only grandchildren, twins Victoria Nicole and Ryan Michael along with numerous friends and family.

Jim Van Meter was one of a kind; a unique treasure, an amazing soul.  He was honest, pure in heart, transparent, kind, compassionate, loving, caring, doting, deep, dynamic and quite simply, the best human anyone had ever known.  He was always humble and treated everyone as if they were special; because his truth was that every human IS equal and special.  He was selfless and always went out of his way to help others, even in the most trying of times.  He was always shining his light on others and illuminating their beauty; this was his way of helping others feel positively about themselves.  He knew how to have fun, he loved to laugh, he was badass, sparkly and sensitive all at the same time.  If you knew Jim, you’d know some of his favorite expressions: “It is what it is”, “I am what I am” and “Yaaaaaayyyy!”

As a husband, he was committed and loving, always doting on his Suzi.  As a father, no one could ever ask for anything more.  His Julie was the apple of her father’s eye and he loved her with all that he was .  He taught her and everyone else he mentored  to believe in themselves and instilled in them the belief that  “If you set your mind to it, there is NOTHING you can’t do.”

He loved life and he lived big, connecting deeply with people everywhere he went from Ohio to Key West, FL and every place in between.  There are countless individuals that he loved and who love him.  To know him IS to love him.  While he is already missed in the physical sense, he is now part of the divine.  His light and love are cascading further than they ever could in the physical sense.  He is and will always be a part of those who knew and loved him.

Several celebrations of life are planned for friends and family at a later date.  To honor Jim, donations can be made in his name to Alzheimer’s Association or Human Rights Campaign.

Offer Condolence for the family of James E. Van Meter