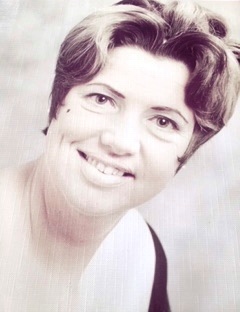 Dover, NH – Alberta Turgeon,  formerly of Somersworth, NH and Bluffton, SC, went to be with her Lord and Richard on June 18, 2021 in Dover, NH.

Alberta was born in Dover, NH on September 26, 1930, the daughter of the late Albert J. and Mona (Rowbotham) Courchene. She was preceded in death by her husband of 68 years, Richard M. Turgeon, her brother, Albert Courchene, and her half-sister, Debbie Pacheco.

Alberta and Richard built a home in Somersworth, where they lived most of their married life. Early in their retirement, they lived in Bradenton, Florida, then moved to Sun City in Bluffton, South Carolina, while spending the summer months in NH and Maine.

Alberta and Richard worked hard to build a good life. For many years, Alberta was a hair stylist at Edith’s Hair Salon in Dover and Richard worked at General Electric in Somersworth. They enjoyed traveling and Alberta delighted in get-togethers with family and friends. She loved being Ma Tante Alberta.

Alberta’s faith was a source of great comfort to her. She attended St. Martin Church in Somersworth and St. Gregory the Great Church in Bluffton.

Alberta is survived by her son, Richard Turgeon and his wife, Karen Bennett of Biddeford, Maine, her cousin Laura Adams, Albert’s wife Marcia Courchene, and many beloved nieces, nephews, godchildren, and dear friends.

We are thankful to Alberta’s family members and friends for all the visits, phone calls, and love sent her way. We appreciate the care and kindness given her by the staff at Langdon Place of Dover and Wentworth Home and Hospice Care.

Services are being planned for a later date this summer.  No flowers please, should family and friends desire, memorial contributions may be made to your local humane society or your favorite charity.

Offer Condolence for the family of Alberta T. Turgeon